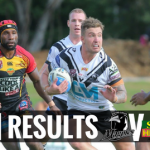 The PNG Hunters just managed to keep their unbeaten run against the Souths Logan Magpies intact yesterday with a close 22-20 win at Davies Park.

In a thrilling and evenly-contested match – the Magpies had the chance to level the scores after the fulltime siren with Scott Doyle lining up a conversion kick, only for it to be waved away.

The PNG side are now up 7-0 in the head-to-head; but this was a game were a draw would have been a fitting results given the effort of the two sides who scored four tries apiece.

The Hunters opened the scoring in the 13th minute with fullback Stargroth Amean stepping his way through defenders to post his side’s first try.

The opening came after the Hunters were able to put some continued early pressure on the Souths Magpies line.

The Magpies hit back when their fullback Jamayne Isaako was able to cross the line.

Both sides posted one more try each in the half, with the Hunters taking a 12-10 lead at halftime with co-captain Ase Boas slotting two from two conversion attempts in the first half.

The second half was another closely contented battle, within neither side able to break free of their opponent.

However, some rampaging runs from Willie Minoga (who coach Michael Marum has now fashioned into a powerful centre) proved decisive.

Difficult to tackle and possessing a deceptive speed for a large player, Minoga ran in the next to tries for the visitors to put them out to a 22-10 lead.

That proved to be just enough, despite the Magpies mounting their spirited comeback, with Cameron Booth scoring the key try in the right wing after taking a pin-point kick from half Matt Minto.

This weekend, the Magpies will have to put aside their disappointment when they travel to the Gold Coast to take on Burleigh, while the Hunters are back at home and will host Norths Devils.

From the club house.

“As a group we were disappointed in the result and the final score line. I think it’s fair to say we were on top for the first half hour and we were a dropped ball over the line from taking a deserved 18-6 lead just before half time.

But to the hunters credit they didn’t panic and worked there way back into the contest and backed themselves and scored a couple of tries on the stroke of halftime which broke our spirits.

There were plenty of good individual performances but it was our inability to overcome some tough calls as a team which ultimately hurt us and that’s an area of our game where we need to be a lot better.”

The PNG Hunters have started the season in emphatic fashion, racking up 40 points against Souths Logan at Davies Park yesterday.

Starting the game with eight debutants, the Hunters took time to adjust, conceding first points after letting a bomb bounce for Souths Logan to pounce upon to score and convert in the opening five minutes.

The Hunters bounced back quickly, surging up field through the heart of the Logan defence before a smart offload by Wartova Puara set up Adam Korave to score next to the posts to level the scores.

Play seesawed between the two sides with the Magpies dominating possession to dive under the posts from dummy half to score and convert 20 minutes into the match.

From there it was all the Hunters, with heavy defence causing turnovers and giving more possession to the talented PNG team.

The next try was simply magic from the Hunters with several offloads in traffic before Stargroth Amean dived over untouched in the corner. Roger Laka converted from the sideline to level the scores at 12-all.

The Hunters were playing with confidence and again burst down the right side running the ball on the fifth tackle in their own half.

Puara offloaded to a flying Thompson Teteh who made a searching run up field before offloading to Laka who turned it inside to Oti Bland Tony to score the first of his two tries for the match under the posts to take the lead 18-12 with 12 minutes left in the half.

The Hunters weren’t finished with however with a scrum packing down right on full time and a smart inside ball from Israel Eliab to a determined Teteh, twisting and turning and beating several defenders to score in a display of blistering speed, strength and determination.

With a 22-12 half-time lead, the Hunters started the second half in similar fashion maintaining possession with Eliab stepping to the fore after impressive lead up work by his inside men to beat two defenders and race 30 metres to score in the corner.

The game was slipping away for South’s Logan as they took the odds to a short kick-off restart, regathering and putting them on the attack, but the strong goal line defence from the Hunters caused a turnover to give possession again back to the visiting team.

It was all the Hunters as they showed a slick set of hands through the backline for Oti Bland Tony to score his second out wide.

The Hunters seemed to be able to break the Logan defence at will with smart work by an unstoppable Katio Ottio before another ensuing attacking raid from Teteh and a no look pass put David Lapua over in the corner for his first try in the Intrust Super Cup for the Hunters.

Scrappy play dominated the next stage of the match with a mountain of possession to Souths eventually seeing Logan’s best player Mitch Garbutt stretch out and score under the posts to bring the score back to 36-18.

The last statement came from Teteh who charged down a kick, regathered and raced 70m to take the fulltime score to 40-18 to the Hunters.