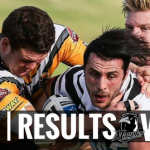 The Souths Logan Magpies upset the Falcons on the Sunshine Coast on Saturday, posting a 22-12 win.

Centre Scott Doyle got the ball rolling early for the visitors with a try in the opening three minutes – but it was a tighter affair from there, with no team able to get on the board again until the 30th minute, when Doyle struck again.

He also converted one of his tries, and slotted a penalty goal heading into the break, contributing to a 12-0 scoreline at halftime.

While the Magpies were out of the blocks early, the Falcons were their own worst enemy, with coach Craig Ingebrigtsen lamenting his side’s poor overall showing.

“That was the worst performance I’ve seen from a Sunshine Coast Falcons team in two years,” Ingebrigtsen told the Sunshine Coast Daily. (Read their full report at their website).

However, Storm hooker Jake Turpin, who shared the dummy half duties with Alex Bishop, was one bright spot in a beaten side, bagged a double of his own in the second half.

While his first pegged the scores back to 12-6 and gave the home side a sniff of a comeback, that idea was quickly diffused by a try against the run of play to Souths Logan winger Cameron Booth only moments later.

It was the first win for Magpies coach Jon Buchanan who took over the reins from Josh Hannay in the off-season.

Next weekend, the Falcons travel to Cairns to take on the Pride, while the Magpies will be at home at Davies Park and will host the PNG Hunters.