It started as a match that heralded the debut of Souths Logan wunderkind Tanah Boyd, but ended with the Magpies suffering a shock 28-22 loss to the CQ Capras that may come back to haunt them.

Boyd was given special dispensation to play in the match before his 18th birthday (which falls on July 28), making him officially the youngest player in the Intrust Super Cup so far this season.

Just a touch after the 20-minute mark, Boyd also had his first try in the Intrust Super Cup, helping the Magpies to a 10-6 advantage in the town of Barcaldine.

can be in their home region and they proved just that.

By halftime the locals had amended the score to 16-10 in their advantage, going on with the job to lead 28-16 before a try to the Magpies in the dying minutes.

The Capras got the mission done minus high-profile forward Dave Taylor, who didn’t start at all after being rested for most of the previous week’s game with a calf injury.

It was their fifth win at home this season, and second in a row after a strong win against the Mackay Cutters in Round 16.

Amazingly, the Capras are still yet to snatch a win away from home soil in 2018.

The victory moves CQ four competition points clear of Mackay for the wooden spoon, and that may be a bridge too far for the Cutters with the season counting down.

Conversely, the loss is a body blow for the Magpies, who are only one loss away from potentially dropping out of the top six.

One interesting name on the Souths Logan team sheet was interchange player Manaia Cherrington, the former Wests Tigers NRL player who has transferred from the New Zealand Warriors.

Known as a livewire hooker, Cherrington has not played NRL since 2016 and was introduced for the final 45 minutes for the Magpies, replacing Travis Waddell.

The sin bin attendant was kept busy through the night, with Simi Fatafehi (Souths Logan) and Blak

Next week both teams are on the road, with the Capras playing Norths, and the Magpies up against Tweed Heads. 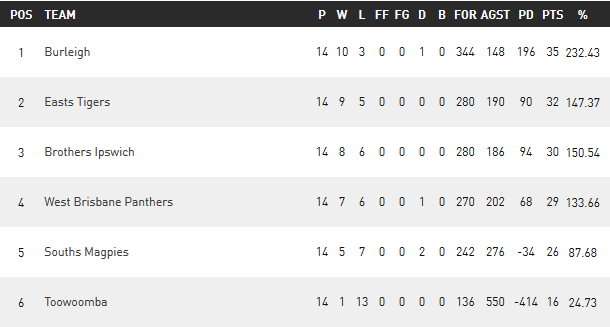