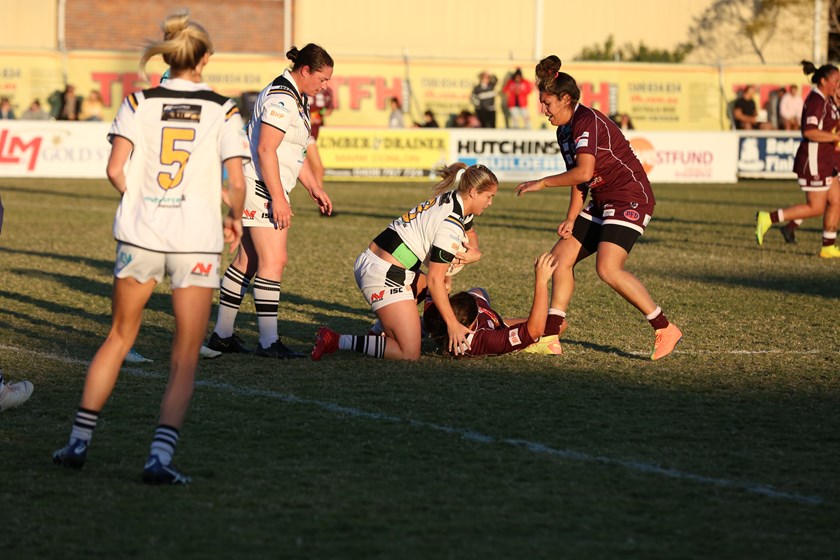 A standout performance from Burleigh’s forward pack and some costly errors have seen Souths Logan drop their first game in the Holcim Cup competition 16-10 in the Round 4 action at Pizzey Park.

Defense dominated the first 30 minutes of action with both teams getting into an early arm-wrestle with some fantastic back and forth football until Tarnisha Lyons crashed over to open the Bears account at the 15 minute mark, when the winger found some space out on the Magpies left edge.

A few handing errors from Souths Logan coming out of their own half gave the Bears plenty of ball inside their own half and some individual brilliance from QLD Maroon’s forward Millie Boyle who found the chalk late in the first half to give Burleigh a 10-0 bumper heading into the break.

Souths Logan came out after the break with much better ball security and on the back of some fantastic carries from Annette Brander and Lyllian Mikaio the Maggies got over thanks to a bit of eyes up play from Ali Brigginshaw, who took the line on and was able to beat the Burleigh defense to cross.

Burleigh then hit back after a crazy 60 seconds of football with a long line break from both Tamika Upton and then an intercept from Jodeci Nicholson, which was only denied by a fantastic effort play from Hayley Maddick, but the Bears scored on the next play to take it out to 16-6.

Meg Ward scored a late consolation try out wide in the dying moments to give the Magpies the crucial 2nd half point in the Holcim Cup halves split, which gives the SLM girls plenty of confidence heading into next week’s match up with the Bears again and then will also take on Easts to round out the round matches.