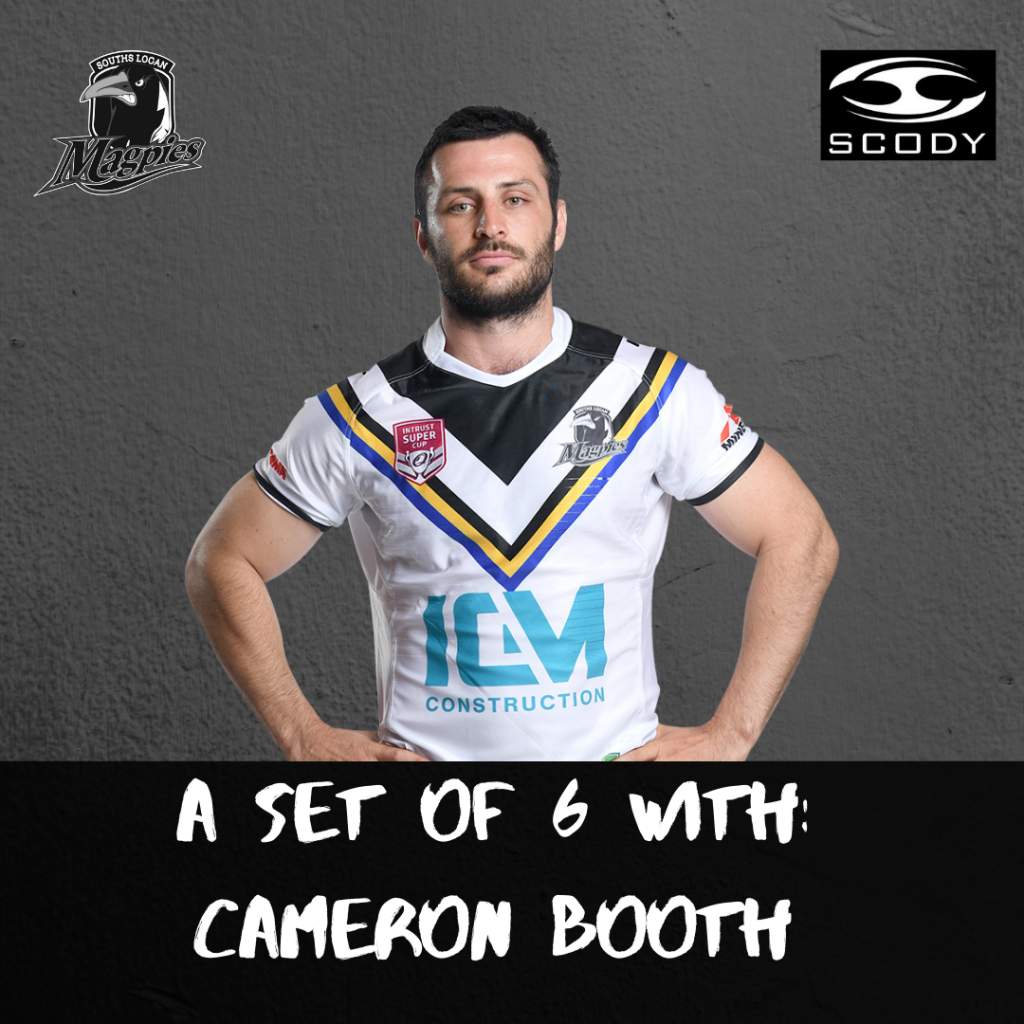 This week we kick off our A Set Of 6 series, where we sit down with your Souths Logan Magpies men’s and women’s players and get to know them better as people on and off the footy field.

First up we have been lucky enough to have a chat with the longest-tenured Magpie for season 2020 in Cameron Booth.

Cameron has played 64 games for the Maggies in an illustrious career to date, which as seen the Logan junior be a staple in the Black and White in recent seasons and is definitely a crowd favourite!

1: First of all, mate tell us about your earliest footy memory and which club/clubs you got started in?

The earliest footy memory for me would be just going down to my local club after school with mates and kicking the footy around.

2: Did you have a favourite NRL team growing up and who were your heroes as a kid?

Just like every kid who grew up in Brisbane, I loved the Broncos as a kid so I’d say them. As for a hero growing up probably just anyone who played for the Maroons, I really looked up to all the players who wore the QLD jersey as a kid.

3: You played Under 20’s with the Canberra Raiders, how was the experience of being in and around an NRL system as such a young age?

Canberra was a great experience for me as I was very fortunate to be billeted with some great people as well as the people within the club who looked after me really well.
Footy wise it was pretty good getting to play before the First Grade at the big stadiums and having all extras that the NRL systems have.

4: As a Logan kid, how was it to make your Intrust Super Cup debut for the Magpies and what does playing in a Souths Logan Jumper mean to you?

I made my debut for the club back in 2012 with the bash brothers Andrew Edwards and Mattew Cameron in the front row. I will never forget the game, with it ending in a draw after an 80-minute tussle.

I just love the Magpies being from Logan originally, I used to watch the Souths Logan games as a young fella. I was in attendance at North Ipswich Reserve in 2008, the day Souths won the GF against the Jets.

Playing for the Pies is just a lot of fun, there is nothing better than singing the song with all your mates after a great win.

5: What do you do as an occupation?

Myself and Guy Hamilton have a Landscaping business so plenty of cutting grass all day!

6: What do you do to relax away from the game and what are some hobbies you enjoy?

Away from training and the games, I like to chill out by filling in a few TAB tickets and depending on how many wins I chalk up usually decides what else the day brings.