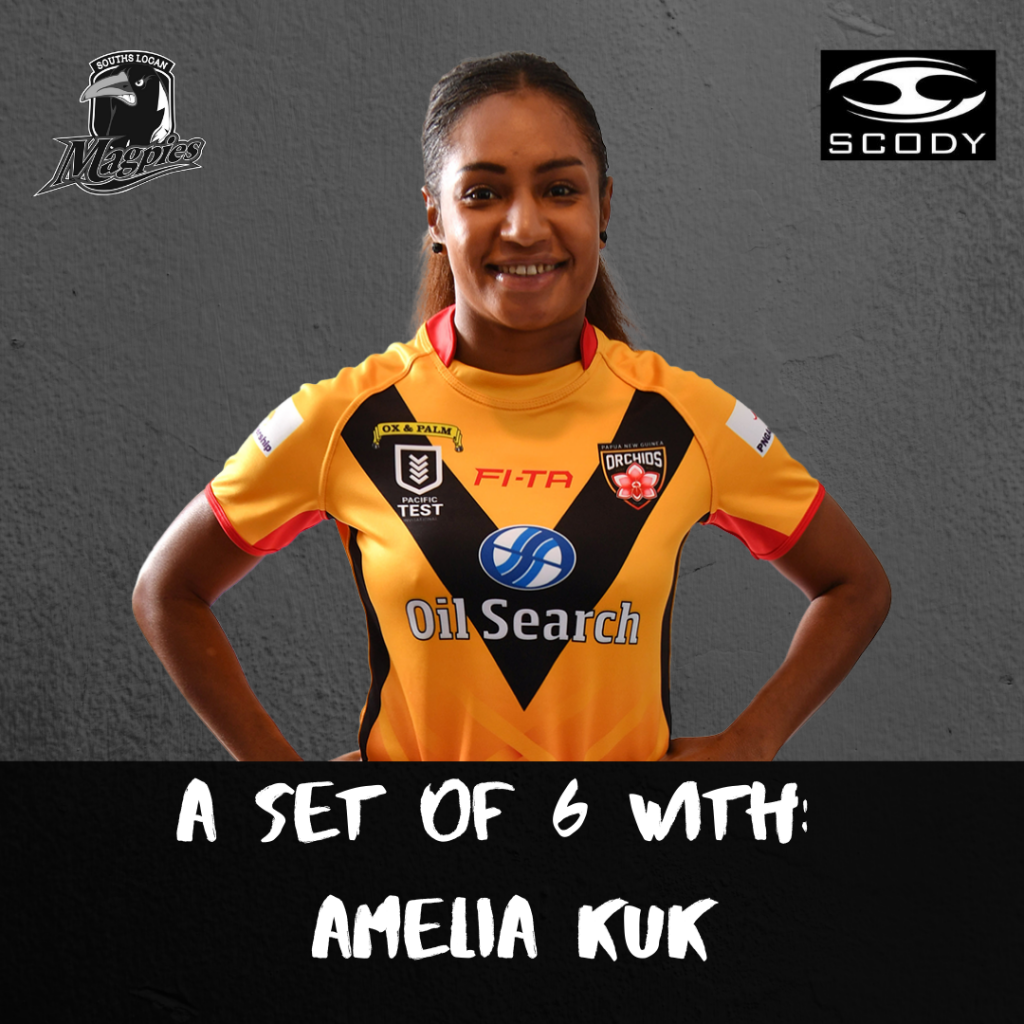 Welcome back to another edition of A Set Of Six, where this week we sit down with Amelia Kuk from the PNG Orchid’s and Brisbane Broncos NRLW team.

Lala has played for both PNG and Australia at an international level as well as Rugby 7s at an elite level and has done all that while being a full time nurse!

1- You were born in Mount Hagan in PNG, What were your first memories of Rugby League?

I grew up watching Rugby league at a very young age especially State of Origin. It was very big back home and we had half a day at school on origin day and it was pretty much a sports day where you’d come in NSW or QLD colours and take part in all these different activities. As soon as you got home the whole family would be getting ready cooking up a feast and painting  their faces ready for the big game. I was the kid with the paper and pen going around collecting everyone’s bets. The most memorable nights were origin nights. I didn’t play league until 2016 when I got a Phone call from Rob to come down to Souths and see if I’d be interested in playing some league. Never looked back ever since.

2- Being only young when you debuted for both the Orchids and Jillaroos, what was it like being on the biggest stage so early on in your career?

I debuted for Jillaroos when I was 21 so a little after my teenage years and debuted for the Orchids the same year at the end of the year at the 2017 World Cup! It was unreal getting to put on both jerseys in the one year. I was really enjoying my footy and still new to the game that time so I put my best foot forward in every opportunity and came out having a really good year of footy.

3- You have a background in Rugby 7s, how does this help your Rugby League game?

I played 7’s a few years ago now but I think the awareness that I’ve gained from 7’s has helped transfer across to league.

4- Having come back to Souths Logan Magpies this season, what is it like to pull on a Magpies jersey and play at Davies Park?

It is good to be home. I played my first game of rugby league for Souths in 2016 and had to move to brothers in 2017 because Souths didn’t have a team that year and again all it took was another phone call from Rob and I was back in the Magpie colours.

5- You are a Registered Nurse and have been working full time while playing footy, how hard is it to balance the two especially given the current COVID pandemic?

It’s not easy juggling shift work with footy. I’m constantly coming off Night shifts and trying to rest in between training and doing proper recovery and then getting up and going again. Working during COVID has been mentally draining at times but I’m glad footy is back because I get to have fun and get in some Physical therapy with tackling as well as being surrounded by an awesome bunch of girls. Definitely healthy for my mental state.

6- What do you like to do away from work and footy to relax?

I love the outdoors so I’m always looking out for the next mountain to climb or waterfall to swim or the next hike. On my days off I catch up with friends which mostly involve doing adventurous stuff before getting breaky or a coffee which I find very refreshing and it’s like pressing the restart button to get up and go again. There’s something about nature that keeps me going back for more. I also love a bit of quality time with my sisters. They are some of the funniest people I know so whenever we get together it’s always good to have a banter and have a laugh . It’s very good for the soul