The Souths Logan Magpies came out on top in Round 12’s highly anticipated encounter with the Ipswich Jets, out-pointing their opponents 34-18.

Both teams are fun to watch when their attack is on, and it was the Jets who crossed first with hooker Kierran Moseley over from dummy half in the seventh minute.

The Magpies responded 10 minutes later through Guy Hamilton who put on a show-and-go down the left side; going straight through a big gap to score. 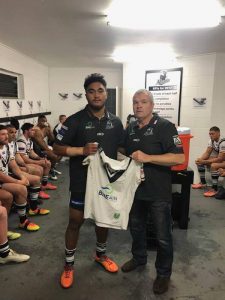 On Debut for SLM: Kobe Tararo with CEO Jim McClelland

They were in again soon after when young star David Fifita nabbed his first try in just his second game after standing outside the scrum; palming off defenders and running 50m to score.

The home side then made it three unanswered tries in a row when fullback Lenny Magey went over in the left-hand corner after his side went through the hands with some slick play.

A penalty goal to Hamilton just before halftime saw his side take a comfortable 20-6 lead into halftime.

While both sides like to entertain, there were 10 penalties in the half and possession flowed with the penalties.

While Souths took their chances to score; the Jets wasted theirs and were left to pay.

The second half didn’t halt the run of the Magpies with forward Brendon Gibb over off a kick.

A bit of niggle crept into the second half with both teams losing two each to the bin.

In that time, Paul Rokolati extended the lead for

the Magpies running 50m to score after the Jets threw an interception.

The Jets tried to work their way back and after back-to-back penalties, forward Ben White crossed to reduce the margin.

Another penalty goal to Hamilton pushed the home side’s lead out to a 34-12 lead with seven minutes left in the match – but it was the Jets who had the final say, with Wes Conlon benefiting from some trademark Jets offloading to go in.

While he kicked the successful conversion, the Magpies were too good; claiming another strong home win.

Next week, Ipswich host the in-form Burleigh Bears; while Souths Logan travel to Cairns to take on the Pride.